The big pregnancy announcement was a great friend of mine and his wife. This is a college friend that I’ve known for almost 17 years. A friend who changed my life forever by introducing me to K. A friend who two years ago after I told him of our infertility diagnosis invited K & I to the Bahamas with him and his wife to get away from things. He is a special friend who means the world to me. I couldn’t be more happy for him and his wife who I know will be great parents. But at the same time it’s a reminder of being the one left out. Everyone has moved on with their lives while K & I are living the exact same way. I feel left out and that we no longer have things in common with friends in our lives. It’s sad and frustrating for me going to the deepest darkest pain that infertility has brought me.

The frustration its brought me is that I don’t know what to do next. I’ve tried to move on by trying different things to bring me joy and it has helped but something is missing. A big thing that’s holding me back is the feeling that K & I never tried passing on infertility treatments, third party reproduction and adopting. Also, I don’t feel like we went through this together.

Because the grief and pain that infertility brought me I pushed my wife away as I became so obsessed with finding ways for us to become parents. The feeling that we didn’t go through this together was influence by my impatience and obsession with becoming parents. It’s something I recognize now though I can’t change the past.

What I can do is change the present and future. Yesterday I got thinking about things I’ve written against doing for some time. I’ve written how hope and miracles are all bullshit and that conception isn’t an exact science. I’ve argued that believing in hope doesn’t impact the outcome of ones journey. Well now I get to be a hypocrite and say that I’m going to take a leap of faith and re-open a closed door and explore treating my infertility.

For those of you who don’t know my infertility is a result of non obstructive azoospermia. The non obstructive azoospermia more specifically is a result of a Y Chromosome Microdeletion in the AZFb and AZFc regions. The only known way for a man with Y Chromosome Microdeletions to conceive a child is for a biopsy to be done and an attempt for sperm to be extracted. With the Microdeletions I have there has never been a reported case of sperm being found in a man even through extraction. Two years ago I passed on having a biopsy to be done because of the odds of finding anything, the chance that even if there was anything found I would have passed the condition onto a male child and we still had the door open on third party reproduction. One way or another I felt that we’d become parents someday.

Two years later with the doors closed on non biological parenthood and me not being able to move forward I think it’s time to go back and explore my infertility to gain closure on it. I don’t know what the end result will be. Sure the odds are not in our favor even if they find something who knows what they would be able to find and the condition of it. If we get to that point visiting a geneticist would be part of the process. Then you have to factor in that even if everything is ok there then there is the whole conception part. It’s a billion to one shot. It would take a miracle for it to happen. But if it is going to happen, why not K & I be the ones who it happened to? I’m hopeful that if it is possible it could be us. Not that our situation is the same but there are so many couples that have a small chance of having kids who end up beating the odds. It doesn’t guarantee it will happen for us but it gives me hope that it could.

I would give both of my nuts to either gain closure in whether we become parents and becoming parents. I literally will be sacrificing my nuts to the infertility gods as insane as that sounds. I’m scared shitless of what we will have to go through to do that as I’ve never had a surgery before. The potential outcome is scary as well. Though the pre infertility me that still exists deep down believes that I can do it, K can do it and most importantly we can do it together. Two years ago I don’t think we could have done it together but now I am confident we can do it the right way together.

I’m a big Rocky fan obviously being Italian and short thinking that I’m more capable than others believe. I feel like this is going to be like Rocky III where Rocky gets knocked out by Clubber Lang and has to reinvent himself as a fighter drops weight becoming quicker, stronger and more mentally tough. He takes a chance and even though he’s afraid he goes for it not knowing what will happen but comes out on top in the end. I am scared of infertility it has knocked me out but I am going to get back up and take it on one last time.

This isn’t going to be easy. This will be very hard and likely will be all for not. I’m going to be positive and hopeful that regardless of the outcome everything will be ok in the end for us as a couple. Does that make me nuts? Maybe, but but this Italian Stallion would rather be nuts and know rather than always wonder what might have been if we took a chance.

P.S. I welcome all types of comments including ones that bring humor to this situation. I’m always up for a good laugh and have learned that humor is a great way to get through tough times in life. 🙂 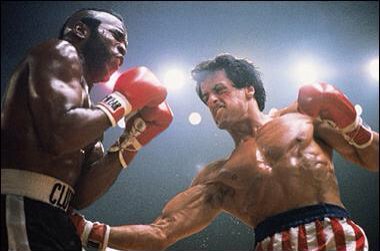 34 thoughts on “Am I “Nuts” for Re-Opening Closed Doors?”