Those of you who are friends with me on FB know it was an interesting week for me two weeks ago to say the least.  The week prior during a track workout I had my right calf cramp up.  This isn’t that unusual as I have calf and Achillies tendon issues.  I got through the rest of the week and my long run on Sunday without any major issues though my calf wasn’t at full strength.

On Sunday night before I noticed a red spot on the back of my right calf.  I didn’t think anything of it as it didn’t hurt.  Monday night when I got home after work I noticed my right calf was red and swollen.  The skin was also tight.  I put heat on it to see if that would help.  Tuesday morning the calf felt better the swelling went down so like the dope I am I decided to go out for the 6 mile run I planned on doing.  Throughout this whole time my wife told me to take it easy and take a day off (of course I didn’t listen).  During the run and after the run I felt ok.

It wasn’t until later in the morning while at a meeting that my calf started to feel like a balloon about to burst both numb and tight (below is a pic of my sexy swollen calf in the ER I took).  Reading symptoms online I had some signs of a blood clot.   I didn’t have any chest pains or trouble breathing so I wasn’t too worried that it was that.  Though I didn’t want to take any chances so I went to an Urgent Care Center after work.

At the Urgent Care Center the doctor told me it was either a blood clot or some type of infection but he didn’t think it was an infection because I had no scraps or cuts on my leg.  They didn’t have an Ultrasound machine there to confirm so I would have to go to the ER and have it done there.

For anyone who has been to the ER you know you can be there for hours.  So I called my wife and told her I was coming home to change, grab a snack and then we’d go to the Hospital that is 5 minutes from the house.  The Hospital is less than 5 years old.  When it was being built I thought that would be where our children would be born.  Of course on the way to the hospital I had to joke with my wife that we would finally get to check out the new hospital.  She laughed and said she didn’t want to see it like this.  Mind you at this point she was ready to strangle me for not listening to her earlier in the day.

Throughout the entire ordeal I was pretty calm in good spirits joking around and laughing.  It wasn’t until I was having the Ultrasound done where my nerves kicked in.  Some deep breaths and meditation calmed my nerves.  Once the tech told me no clots I was relieved but still uncertain as to what it was.  30 minutes later back in my ER room the Physician Assistant came in and told us that I likely shredded a piece of muscle off my calf that caused a blood vessel to burst which caused the swelling.  I would have to take it easy for a few days elevate and ice it after that I should be ok.

So at the end of the day I was ok and I got to finally check out the new hospital that infertility prevented us from seeing. 🙂 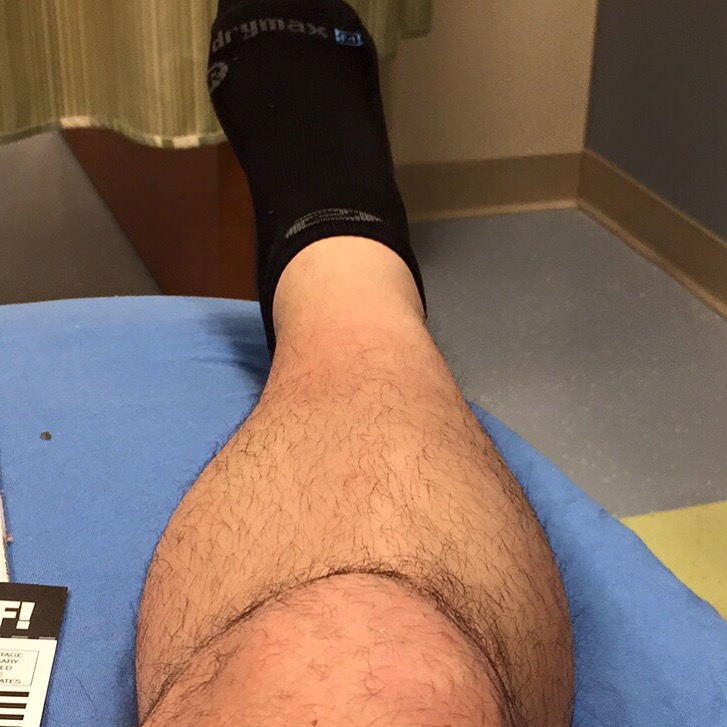 The follow up is that two weeks later I’m doing well.  I had my last long run before my next half on the 15th yesterday and I’ve begun acupuncture treatments to help.
All in all things have been great in my world outside of that scare.  My training has never gone better for a race and I feel a good race coming.  This past Friday night I went to a fucking amazing PJ concert where they played the entire ten album front to back to start the show (only second time they’ve done that).  Saturday I went to a Met game with the Metsies off to a good start this season.
Hope everyone is well. 😀👍🏻

10 thoughts on “Checking out the New Hospital…..”